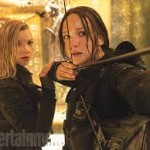 Of all the YA adaptations to come to the cinema in the past few years, “The Hunger Games” has done it the best.  More adult, more self-assured and flat-out entertaining than the other offerings out there, The Hunger Games’ only misstep was to split the last entry into two separate films.  “Mockingjay – Part 1” though well acted, felt like build up and filler and, quite frankly, seemed unnecessary.   That said, “Mockingjay – Part 2” is a very satisfying conclusion to a tremendously entertaining series, a dark triumph that isn’t afraid to go to some uncomfortable places.

“The Mockingjay – Part 2” picks up where the last film left off, with Katniss Everdeen (Jennifer Lawrence) attempting to recover from an attack by Peeta Mellark (Josh Hutcherson) who’s been brainwashed by the evil President Snow (Donald Sutherland).   When she recovers, Katniss is charged by rebel president Alma Coin (Julianne Moore) to be the promotional face of the invasion of the capital, even including Peeta in the group to prove he’s fighting against Snow.  But Katniss has her own plans and uses the promotional agenda as an attempt to kill Snow and end the war.

The Mockingjay Part 2 hits the ground running and doesn’t stop for most of its two hour-plus running time.  Returning director Francis Lawrence finally has a chance to cut loose in the finale and he doesn’t disappoint, aided by the structure of the script (penned by Peter Craig and Danny Strong from Suzanne Collins’ novel) which basically makes this film a chase film.  Snow, realizing the rebels are coming, enlists his master game makers to fill the capitol with “pods,” several traps that are designed to kill the rebels in as nasty a fashion as possible.  Lawrence does a terrific job with several set pieces, most notably a sequence underground involving these horrific creatures called “mutts” that kept me on the edge of my seat throughout.

The acting, as has been the case throughout the series, is first rate, with Jennifer Lawrence again leading the way as Katniss.  Lawrence is a terrific actress and she has made Katniss her own, a combination of strength and vulnerability that allows Katniss to experience seemingly soul-crushing defeats and yet still continue to fight.  She is a hero for the ages.  Hutcherson finally finds his footing in this installment, his struggle within himself dramatized beautifully and sometimes painfully.  Lawrence gets more fine performances from regular cast members such as Woody Harrelson, Julianne Moore, Liam Hemsworth, and the late great Phillip Seymour Hoffman.  Special mention must be made of Donald Sutherland as President Snow, one of the most hissable villains in recent memory.   This series would not be half as entertaining without Sutherland’s dominant performance.

This movie is not afraid to go to some dark places, so be warned if you’re planning on taking the kiddies.  I haven’t read the books so I don’t know if what happens in the latter half of the film will come as surprise to fans but it certainly came as a surprise to me.   My only complaints about the film revolve around the fact that it takes a little time to get started and that the endings seem to stretch on forever (a la “The Return Of The King”).   Other than that, “Mockingjay Part 2” is a stirring, emotional and exciting conclusion to the Hunger Games saga.  4 Out Of 5 On Kendog’s Barkometer!  So Sayeth The Kendog!

Once again I have to thank Doug Link and the folks at the Esquire IMAX for providing a first class viewing experience.  I highly recommend seeing “Mockingjay” in this format.   Besides the great seats, terrific picture and sound, you can enjoy a glass of wine or beer with your movie.  Get your tickets here.

“The Hunger Games: Mockingjay Part 2” is Rated PG-13 for intense sequences of violence and action, and for some thematic material.