Dog’s Movie House: “The Night Before” Raunchy Yet Heartfelt Fun! 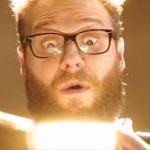 Seth Rogen in “The Night Before”

I’ve got to hand it to Seth Rogen: the man knows how to make me laugh.  I know he has his share of detractors, but for some reason his brand of humor just vibes with me.  With films like “The Interview,” “Neighbors,” and “This Is The End,” under his belt, he has consistently made me laugh with his films.  Now, with “The Night Before,” Rogen and his talented co-stars have made a raunchy, funny film that’s filled with a surprising amount of heart.

“The Night Before” tells the tale of Ethan (Joseph Gordon-Leavitt), a man in his thirties who, due to his parents death over ten years ago, has created with his two best friends Isaac (Seth Rogen) and Chris (Anthony Mackie) a tradition of partying, bar hopping, and seeing the Christmas sights of New York  in lieu of the usual Christmas family trappings.  This tradition is coming to an end because Chris is a big time football player and Isaac is about to become a father for the first time.  Fortunately, the three friends are about to go out with a bang as Ethan has scored tickets to the holy grail of Christmas parties. . .The Nutcracka Ball.  Comic misadventures ensue and emotional issues come to the fore.

On the plus side, “The Night Before” does a very good job of balancing laughs and emotional content.  Gordon-Leavitt’s Ethan is the lead in the story and his journey is the heart of the tale.  Ethan is at a crossroads in his life, never getting passed the death of his folks, working middling jobs and ignoring his talent as a musician, and pining for the his one true love.  He’s clearly not a happy person and this last night proves important in a way for him to work out his issues.

But Ethan’s not the only one going through difficult times.  Mackie’s Chris is experiencing a career renaissance with the help of steroids and his newfound fame is going to his head, while Isaac is discovering misgivings about being a father for the first time.   Throughout this night, each friend has to face the inevitable challenges of growing up, and it’s something of a bumpy ride.

Now that’s not to say “The Night Before” is some kind of Lifetime drama.  Far from it.  This movie has some hilarious gags, most of which revolve around Isaac’s mixing of several drugs during the evening, the highlight being Isaac’s encounter with his wife and her family at midnight mass.  Few people do the manic paranoia routine better than Rogen, and he is spot on during this movie.   There’s also a series of hilarious run-ins with a local pot-dealer named Mr. Green (a perfectly deadpan Michael Shannon) and some funny cameos from James Franco and Miley Cyrus.

As acting goes, everyone here is at the top of their game.  Gordon-Leavitt, continuing a hot streak that began with “The Walk” does a great job of balancing the laughs with the drama.  Ethan is something of a screw-up, but Gordon-Leavitt portrays him as a good guy you want to succeed.  Rogen and Mackie do very well with their respective arcs and all three have good chemistry together.  You believe in their long standing friendship.   Shannon is a gold mine as Mr. Green, a philosophical fellow who dispenses life advice along with his pot.

Director Jonathan Levine (who also directed Rogan and Gordon-Leavitt in the terrific cancer pic “50/50”) also gets great supporting work out his female cast members such as Lizzy Caplan, Mindy Kaling, and the terrific Jillian Bell as Rogan’s expectant wife Betsy.  The scenes involving Bell and Rogen are dynamite and I’d love to see them headline a comedy of their own.

“The Night Before” is not without its flaws.  When the script (by Levine, Kyle Hunter, Ariel Shaffir, and Evan Goldberg) sticks to the primary narrative, the movie is golden, but the writers for some reason decide to bookend the film with an offputting narrator (voiced by Tracy Morgan) who also happens to be Santa Claus.  Now the notion of a black, streetwise Santa Claus can probably mind for comic gold, but in this film it proves an odd and distracting choice.  There is also a development with Mr. Green late in the film that comes completely out of left field and doesn’t vibe with the rest of the film.  Thankfully, these tonal shifts are few and far in between and don’t hurt the enjoyment of the film.

“The Night Before” is Rated R for drug use and language throughout, some strong sexual content and graphic nudity