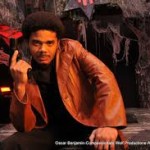 As a movie reviewer, I find that different types of films have different types of ambitions.  You can’t compare “Citizen Kane” to “Enter The Dragon” though both are sterling examples of their respective types of film.  To use the same set of critical guidelines for every film does the film, and the moviegoer, for that matter, a grave disservice and often keeps the reviewer from discovering some of the small, underseen gems of the cinematic world.  To that end, I bring you “Badass Monster Killer” a film made with enthusiasm, heart, and humor on a shoestring budget.

Were you to judge “Badass Monster Killer” on the merits of a Hollywood mainstream movie, you would undoubtedly have picked this film apart and left the resulting detritus writhing on the floor in agony of what could be considered a justified critical assault.  But if you knew going in that this film was shot on a microbudget over a three year time period by dedicated folks who are not full-time filmmakers, the opinion of the film invariably changes.  Tongue planted firmly in cheek, with a fairly clever script by writer/director Darin Wood, “Badass Monster Killer” is an inventively funny take on the blacksploitation horror genre that will hopefully gain a cult fan base in the years to come. 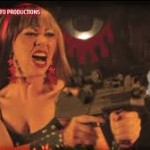 The story is set in the city of Camaroville where Jimmy Chevelle (a spot-on Jawara Duncan) works for a “super-secret government agency that protects the unsuspecting world from supernatural threats they don’t even know exist.”  Channeling Shaft with a little of Will Smith’s K from “Men In Black” Chevelle is a bad mother who is out to take down the powerful occult group that took out Chevelle’s partner five years ago.  And if Chevelle has to bed every woman he saves. . .well. . .that’s just a day in the life of Jimmy Chevelle. 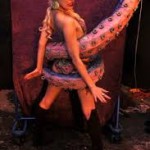 The performances are actually quite good for this type of film, with Duncan anchoring the film as Chevelle.  His dialogue is the toughest to deliver of the entire cast, but Duncan manages to make us laugh with him instead of at him and actively cheer for him to beat up the bad guys no matter how ridiculous the narrative gets.  Also a standout is Ryan Cicak as the Reverend, the evil preacher who wants to bring the Old Ones back via an ancient ritual that will allow him to rule the world.  (You Lovecraft fans know what I’m talking about. . .they even use the Bride of Cthulu as a conduit for the Old Ones return.)  Cicak has a ball here, chewing the scenery with a funky southern accent like a cross between Jim Baker and Gene Simmons of KISS.  Everyone seems to be having a good time here and the enthusiasm is infectious.

As for the production values and effects, what “Badass Monster Killer” lacks in budget in more than makes up for in inventiveness.  While the monsters are a little rough, the designs are killer and the compositing is actually quite good given the film’s financial limitations.  The same can be said for the production design, which is more “Cool World” than “Sin City,” with its curving buildings, multicolored sky, and abundant use of neon signs.  It definitely creates the right atmosphere for you to enjoy the movie.  Also terrific is Phillip Baldwin’s very Shaftyesque score: listen to some of the lyrics as they are some of the funniest lines in the movie.

I have to thank producer/director of photography Christy Savage for a wonderful time at the Esquire IMAX.  The place was nearly sold out and the audience had a ball.  A film like “Badass Monster Killer” needs to be seen with an audience.  We need a worthy successor to something like “The Rocky Horror Picture Show,” and this film could be it.  With quotable dialogue, a colorful production palette, and tons of boobs and blood, “Badass Monster Killer” is a cult classic in the making.  So Sayeth The Kendog!

Note:  “Badass Monster Killer” isn’t slated for wide theatrical release, but I’ve been told that the movie will soon be available for sale on DVD.  These folks are all local and deserve your support.  They’ve made one hell of a movie and it deserves to be seen.  Click on the link here or go to www.badassmonsterkiller.com to check for updates on when the movie will be available to buy and then, you know. . .BUY IT!