Dog’s Movie House: “Agent 47” More Of A Sleep Agent Then Anything Else! 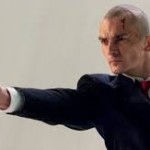 Videogame movies are almost impossible to pull off.  It seems that the filmmakers forget that just having gamers’ favorite characters onscreen is not enough to ensure a good movie.  You still have to deal with little things like plot, acting, and decent cinematography.  Unfortunately, “Hitman: Agent 47” continues that trend, turning what could have been an amusing B movie concept into a loud, lumbering, clichéd bore.

“Agent 47’s” thin plot revolves around an experimental program in the 1960’s involving the genetic manipulation of soldiers into super assassins known as agents.  The program is shut down and the inventor, a man named Litvenko (a wasted Ciaran Hinds), goes into hiding.  Switching to present day, a corporation called the Syndicate is interested in resurrecting the program and think the key to finding Litvenko can be found in locating his estranged daughter Katia (Hannah Ware).  Their attempts to capture her, however, are thwarted by a rogue agent simply called 47 (a monotone Rupert Friend) who has reasons of his own to want Katia.  What follows are a series of chases and double crosses that lead to a potential sequel, which is more horrifying than anything on screen.

Forgive me if I sound a little snarkier than usual.  I know the video game upon which this film is based is considered a minor classic in the first-person shooting genre, but the first film “Hitman” starring Timothy Olyphant in 2007 was just as dreadful and it had a better cast.  Writer Skip Woods (who also scripted the 2007 film) has seemingly failed to learn from his mistakes and has crafted a slick yet soulless enterprise that commits the ultimate sin for any action movie: it’s frickin’ boring!

“Agent 47″could have been a late August diversion, but instead the film feels inert.  First-time director Alexsander Bach shows a decent enough eye for wide shots of lovely geographical locations (he makes Singapore look like a Utopian Shangri-La), but his command of the action sequences is shaky at best and he’s absolutely lost when it comes to directing actors.

Performers like the aforementioned Hinds, Thomas Kretschmann, and Zachary Quinto are left adrift or given very little to do.  Quinto (very good as the villain in “Heroes”) is entirely too one-note to leave much of an impression here.  Rupert Friend, so good in “Homeland” has the proper look for the Agent character, but is so monotone that he makes Arnold Schwarzenegger’s Terminator seem like Olivier by comparison.  He’s supposed to have an arc similar to that of the terminator in the second film: a remorseless killing machine discovering his humanity, but the script and his performance leave little room for either relatability or empathy.

Of course, the real meat of the story revolves around Katia, and Hannah Ware does the best she can with an inconsistently written role.   There’s a twist with her character (which isn’t much of a twist if you’ve seen the trailers) that happens entirely too fast to be believable.  Still, she’s the best thing about the film, both as a character and an actress, and it’s all the more frustrating that the other characters, along with the story, are given the short shrift.

As for the production, “Agent 47” looks slick, but there is an over reliance on CGI for the action set pieces that is frustrating.  It’s sloppy filmmaking, and in a year with standout action releases like “Mad Max”, “Mission Impossible” and others, it would behoove the makers of “Agent 47” to up their game.  Unfortunately, “Hitman: Agent 47” is as disposable and forgettable as they come and not worth your time or your money.  1 1/2 Out Of 5 On Kendog’s Barkometer!  So Sayeth The Kendog!

“Hitman: Agent 47” is Rated R for sequences of strong violence, and some language.