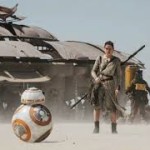 Well in case you’ve been living under a rock, we’ve got a new Star Wars film coming in less than two months and the anticipation is mounting to a fever pitch.  The last time I can remember so much hype for a movie was. . .well, the last start to a Star Wars Trilogy. . .”The Phantom Menace.”  (And everyone knows how that turned out).  So I’ve got the new trailer for you, but I’m adding the one from “The Phantom Menace” to illustrate a point.  “The Phantom Menace” trailer was brilliantly executed and got everyone all geeked out just like the one for “The Force Awakens,” yet the movie (and the whole prequel trilogy, for that matter) underwhelmed.  Now I’m not saying this is going to be the case for “The Force Awakens,” but I always like to temper my expectations for any movie that is so massively hyped as this one.  Trust me, no matter how good this movie is (and I believe it’s gonna be a blast) there is no way it’s going to live up to these insanely unrealistic expectations.  Until December 18th, enjoy the trailers and anticipation.  So sayeth The Kendog!

And for the Comicon Geeks out there!  (Just Like Me, heh)