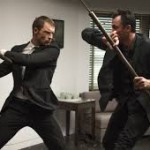 Frank Martin (Ed Skrein) takes on a bad guy in “The Transporter: Refueled”

How much you’ll like the new “Transporter: Refueled” will depend on a couple of things.  First: whether or not the absence of Jason Statham is a deal breaker.  Second: whether a fourth go (five, if you count the television series) at an already derivative action franchise is right up you’re alley for a night at the movies.  For me, “The Transporter: Refueled” is not a total waste of time (see “Agent 47” for a prime example of this) but despite some decent action scenes and some good chemistry between newcomer Ed Skrein (Game Of Thrones) and Ray Stevenson (Thor, HBO’s Rome), this film simply serves as an exercise in action mediocrity. END_OF_DOCUMENT_TOKEN_TO_BE_REPLACED