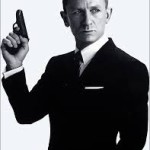 Having just come from the latest James Bond Film “Spectre” I have to say one of the things that impressed me was the level of humor coming from Daniel Craig’s Bond this time around.  While not gut-bustingly over-the-top in the vein of the hope-I-never-see-it Jim Carrey interpretation of Bond, Craig’s superspy is not quite as dour as he’s been in the last few entries.  Speaking of Craig’s sense of humor, I ran across this almost by accident and laughed my rather large posterior off.  Imagine, if you will, what would happen if James Bond had to rent a car and the rental agent was none other than Stephen Colbert.   This is from a recent episode of Colbert’s “The Late Show.” Bonus points for Craig barely keeping it together during the long sketch.  Enjoy!  So Sayeth The Kendog! END_OF_DOCUMENT_TOKEN_TO_BE_REPLACED