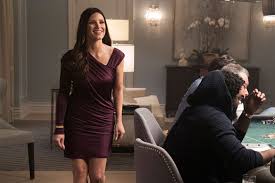 Aaron Sorkin is one of the most talented writers in entertainment.  He’s written scripts for such incredible films as “A Few Good Men” and “The Social Network” and was the creative mind behind the television hit “The West Wing.”  He’s never actually directed a film until now.  With “Molly’s Game” the true story of “Poker Princess” Molly Bloom, he gets to direct a radiant Jessica Chastain from his own script and the result is a highly entertaining, if slightly unfocused film.