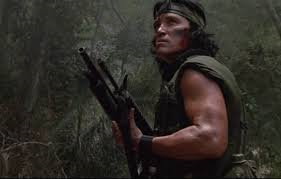 Some sad news today as it’s just been reported that veteran actor Sonny Landham has passed away from congestive heart failure at the age of 76.  Landham worked in pornography in the early 70’s before gravitating toward acting.  He wasn’t terribly prolific but the roles he played sure made an impression.  He first came to filmgoers notice in a small role as a gang member in Walter Hill’s 1979 classic “The Warriors” before being cast as trigger happy criminal Billy Bear in Hill’s “48 Hours”.    His best known role came in 1987 when John McTiernan cast him as Billy, the Native American tracker in Arnold Schwarzenegger’s “Predator.”  The role was perfect for him as the film featured minimal dialogue and was heavy on the action.  Billy is the first one to notice that whatever is stalking them in the jungle isn’t human and his futile final stand on the log bridge is one of the film’s most iconic moments.  Landham later tried his hand at politics with very little in the way of luck unfortunately.  Our prayers are with his family and friends and he will be missed!  END_OF_DOCUMENT_TOKEN_TO_BE_REPLACED