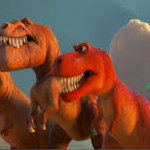 Some Hungry T-Rexes In Pixar’s “The Good Dinosaur”

Pixar has a tremendous track record as an animation studio.  Of all of the features they’ve made, only one is considered “Rotten” on Rotten Tomatoes (It’s “Cars 2” in case anyone is interested.  For my part, I find that movie to be very underrated) and so far it’s continued with “Inside Out” which qualifies as one of the best movies of the year.  While “The Good Dinosaur” doesn’t quite reach the heights of this summer’s offering, it is still a fine, emotionally poignant addition to the Pixar canon. END_OF_DOCUMENT_TOKEN_TO_BE_REPLACED