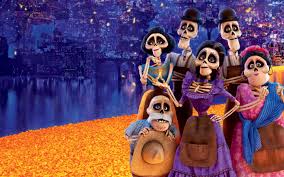 Inhabitants of The Land Of The Dead In Pixar’s “Coco”

I’ve been told on more than one occasion by colleagues that the bloom is officially off the rose at Pixar.  While it’s true that some of their offerings haven’t been as bold and originally as some of their earlier films (I’m looking at you “Cars 3”) the studio continues to put out solid, wonderful entertainment with only the occasional misfire (“The Good Dinosaur).  It’s a record any studio, animated or otherwise, would be proud to have.   That said, Pixar has always been at it’s best when pushing original material and in “Coco” Pixar proves once again that it’s the best in the business when it comes to multilayered animated films.