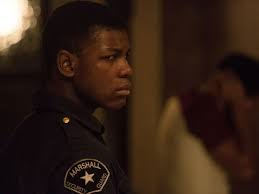 There are some excellent films that are admittedly difficult to sit through due to the unflinching nature of the filmmaker’s techniques of showcasing brutal events on screen.  Kathryn Bigelow’s latest “Detroit” is one of those films.  Detailing the terrifying events that took place at the Algiers Motel during the riots in Detroit in 1967.  Along with her frequent writing collaborator Mark Boal (“The Hurt Locker,” “Zero Dark Thirty”), Bigelow and her crackerjack cast puts the screws to the audience from the very beginning and doesn’t let up until the end credits roll.  This is a film that depicts a terrible time in our nation’s history and serves as a timely reminder that. although we’ve made progress in terms of racial relations, we still have along way to go.   END_OF_DOCUMENT_TOKEN_TO_BE_REPLACED