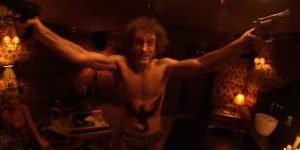 Have you ever wondered what it was like to watch a movie filmed like a first person shooting game?  I know I haven’t, but somebody must have been clamoring for one, because the brains behind “Wanted” and “Abraham Lincoln: Vampire Hunter” have decided that watching an action picture entirely from the point of view of the protagonist was a great idea.   What’s the verdict?  Well, the good news is that “Hardcore Henry” has some really neat action propelling a thin but still-interesting story.  The bad news is that you have to sit through some wretched performances and some nausea-inducing shaky-cam to get to them.   END_OF_DOCUMENT_TOKEN_TO_BE_REPLACED