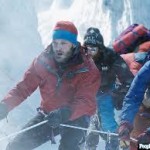 I do like man versus nature movies.  Films like “The Edge,”  “The Grey,” and hell, even “Twister” are always on my re-watch radar whenever I see them either on video or on television.  Ad a true story to the mix and that ups the must-see ante for me even more.  So “Everest” based on an ill-fated climb in May of 1996, should have been a slam dunk.  Instead, while entertaining, “Everest” misses the mark of adventure classic due to underdeveloped characters and a script that failed to engage my sympathies fully for the plight of the climbers. END_OF_DOCUMENT_TOKEN_TO_BE_REPLACED