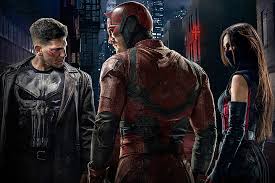 The costumed avengers from Hell’s Kitchen in “Daredevil!”

While the explosion of comic book movies has hit its highs and lows, the truth is that superhero flicks aren’t going anywhere anytime soon.  With the release  of “Batman vs. Superman: Dawn of Justice” (read my review here) things promise to get a whole lot bigger, if not necessarily better, in the realm of comic book cinema.  That said, if bigger and badder isn’t your thing but you still like the idea of comic book properties, you might want to cast your eyes to the small screen.  Netflix has recently partnered with Marvel Studios to do a series of television series based on the Marvel heroes of New York.  The first of these was “Daredevil” followed by “Jessica Jones.”  The inaugural seasons of both shows were fantastic and now Netflix has dropped the second season of “Daredevil” and it proves you don’t have a gazillion dollar budget to create an excellent viewing experience.  END_OF_DOCUMENT_TOKEN_TO_BE_REPLACED