Dog’s Movie House: “The Jungle Book” and “Barbershop: The Next Cut” 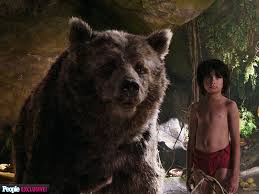 Bill Murray as Baloo in “The Jungle Book”

Right now it’s time for a new feature I’ve come up with to keep up with the sheer amount of movies I’m watching.  I’ll still be doing the movie reviews on a written basis, but they’ll be much more exclusive and detailed.  In the meantime.  Listen below to my appearance on KFBK AM 1530 in the morning.  This episode features my reviews of “The Jungle Book” and “Barbershop: The Next Cut.”  Both films are very good and worth your time.   Enjoy!  So Sayeth The Kendog!

END_OF_DOCUMENT_TOKEN_TO_BE_REPLACED

The Trailer Dog Park: Put A Little “Jungle” In Your Book!

I’ve got a couple of intriguing new movie trailers for you.  The first is from Jon Favreau’s upcoming live action version of “The Jungle Book.”  It features a voice cast of such luminaires as Bill Murray, Christopher Walken, and Scarlett Johansson.  It needs a little cleanup on the CGI but looks intriguing as all get-out.  Then we have Chloe Moritz in an invasion movie called “The Fifth Wave” about dealing with some nasty aliens out to either eradicate or enslave humanity and the resistance that fights back.  Both look fairly decent from the previews but you’ll have to wait until early next year to see the finished films and judge for yourselves.  Enjoy and feel free to comment below!  END_OF_DOCUMENT_TOKEN_TO_BE_REPLACED