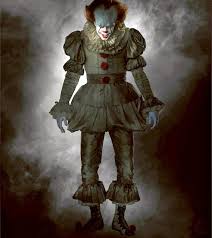 Pennywise The Dancing Clown In “IT”

I have to tell you, the new “IT” film is looking really good, based on the trailers and the second one I’m showing actually features Pennywise speaking.  Talk about a spooky voice!  It’s looking like the Stephen King adaptation to see this year as “The Dark Tower” seems to be a bit of a disappointment.  I’ll be weighing in on that movie this weekend, but in the meantime, check out the second trailer for “IT” below.  Also breaking today was the trailer for Eli Roth’s redo of the classic Charles Bronson film “Deathwish.”  Now I’ll be really interested in your opinions on this particular trailer.  The original film was a tense drama about a man turning to vigilantism in order to not only find justice for his family but also to deal with his grief.  Roth’s take on the material seems more like a generic action film, complete with AC/DC soundtrack.  It’s nice to see Bruce Willis out of the direct-to-video gulag and I have high hopes for the film, but this first trailer is doing me no favors.  Feel free to comment below with your opinion.  So Sayeth The Kendog! END_OF_DOCUMENT_TOKEN_TO_BE_REPLACED