Dog’s Movie House: “In The Heart Of The Sea” Disappointing Effort From Howard And Hemsworth! 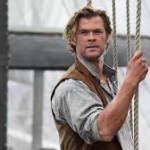 Ron Howard is one of our most successful filmmakers and Chris Hemsworth is one of Hollywood’s rising stars, yet the first film they did together, the underseen “Rush” tanked at the box office.  It’s a terrific film but for some reason it failed to connect with audiences.  Now they’ve teamed up again for “In The Heart Of The Sea,” the fact-based tale that inspired Herman Melville’s “Moby Dick.”  Now I can’t speak about the box office prospects for the film (although industry analysts say “murky”), but, considering the talent involved, “In The Heart Of The Sea” is a decidedly underwhelming affair.  END_OF_DOCUMENT_TOKEN_TO_BE_REPLACED