Dog’s Movie House: “Zoolander 2:” Fifteen Years Is Too Long To Be This Mediocre! 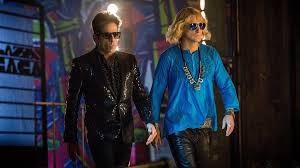 Derek And Hansel Rock The Runway In “Zoolander2”

As I was watching “Zoolander 2” one thought kept running through my mind:  “How in the hell can so much talent produce so much mediocrity?”  Behind the scenes  you’ve got Ben Stiller as the director and co-writer along with Justin Theroux and Nicholas Stoller.  In front of the camera you’ve got Stiller, Owen Wilson, Will Ferrell, Kristen Wiig, and Penelope Cruz along with a cornucopia of celebrity cameos from luminaries from both Hollywood and the fashion world.  With all of that talent you’d think you’d be watching something fairly entertaining at least, but in the case of “Zoolander 2” all you get is a rousing cinematic case of “meh.”

This iteration of Zoolander takes place fifteen years after the original film.  Derek Zoolander (Stiller) has gone into exile after his attempt at educating children goes down in supposedly comedic flames, killing his wife (played by a returning Christine Taylor) and costing him custody of his only child.  Meanwhile, Hansel (Wilson) having been disfigured in the same accident, has gone into his own exile in which he lives communally with a bunch of disparate individuals with whom he has group sex (which is never seen, fortunately).    Both are brought out of retirement by Billy Zane (returning from the first film and doing a great job playing himself again) who recruits them for a new, organic (don’t ask) fashion campaign run by the powerful fashionista Alexanya Atoz (Kristen Wiig with a nearly unintelligible accent).  This in turn leads to them working with the Fashion Police (led by Cruz’s Valentina Valencia) on a case that involves the murder of prominent celebrities for reasons unknown.  The only clue is that the  celebrities take selfies before their deaths using the “classic” Derek Zoolander look “Blue Steel.”

Does that sound convoluted enough for you?  If it doesn’t, give me a call and explain “Southland Tales” to me.  That said, the plot of “Zoolander 2” is easy enough to follow.  The problem is that it just isn’t very funny.  There are a few chuckles scattered here and there, but more often than not there are long periods of uncomfortable silences during which you can actually hear crickets in the theater.  Who knew a movie theater could have such a pest control issue?

Part of the problem lies with me.  I was not a big fan of the original film, finding the characters shallow without being particularly funny.  You get more of the same here and if you found “Zoolander” funny in 2001, there’s a good chance you’ll enjoy number two a lot more than I did.  Everyone in front of the camera tries hard, and Stiller gets some decent laughs with his mangling of the English language, but Wilson is pretty much wasted and Ferrell is just terrible as the returning villain Mugatu.  Cruz is beautiful but also wasted and Wiig tries really hard with little results.  Of the cameos, Kiefer Sutherland gets the most laughs as the leader of Hansel’s “orgy” family (don’t ask) and Benedict Cumberbatch does some truly stellar work as All, a transgender model who is a frightening as he (or she) is funny.  Cumberbatch throws himself into the role of All, but unfortunately he’s only in a couple of scenes.  More All would have been a good thing.  I’d have watched a Zoolander movie with more All in it.  Every other cameo is just there for name recognition and the less said about the subplot involving Derek’s attempt to reconnect with his long lost son in Italy, the better.  (Although the performance by Cyrus Arnold as Derek Jr. is among the best in the movie, the subplot is as poorly written as the rest of the movie.)

“Zoolander 2,” while not completely devoid of laughs, is a very disappointing effort from a group a very talented individuals.  I think that time has a part to play in this: fifteen years is a long time in between sequels, particularly one that I don’t think the public was clamoring for.  The whole enterprise feels like a desperate attempt for folks like Stiller and Wilson to remain relevant on the Hollywood scene and I don’t think that’s necessary for folks this talented.  “Zoolander 2” is only for devoted fans of the original! So sayeth the Kendog!   1 ½ Out Of 5 On Kendog’s Barkometer!

“Zoolander 2” is  Rated PG-13 for crude and sexual content, a scene of exaggerated violence, and brief strong language.