Dog’s Movie House: “We Are Your Friends” DJs As Musicians Awash In Cliches! 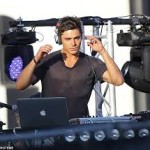 Zac Efron in “We Are Your Friends”

I must say that there are very few things that make me feel my age, but the current state of popular music is chief among them.  I can feel the arthritis I don’t even have yet bending my spine as the my lips thin and my hair grows white and I start waving my cane at those youngsters as I scream,  “That’s not the way it was when I was a kid!  When I was a youngin’ I actually listened to bands who wrote music and played instruments, not stealing other music and puttin’em on a new fangled computer-thingy.”  That said, the problems with the new DJ film “We Are Your Friends” have very little to do with the music and everything to do with the clichéd storytelling musical biopic tropes that have infested many similar films of this ilk.

“We Are Your Friends” tells the tale of Cole (Zac Efron, co-starring with his abs), a talented yet somewhat directionless DJ in the San Fernando Valley looking to hit the big time with a signature sound.  In the meantime, Cole plays the clubs for free drinks and low pay, working the circuit along with his friends Mason (Jonny Weston), a self-promoter with a temper, Ollie (Shiloh Fernandez), a part-time drug dealer, and Squirrel ( Alex Schaffer), the gofer for the group.

For a while, it seems that nothing is going to change for this group until a fortuitous meeting between Cole and superstar DJ James (a scene-stealing Wes Bentley) leads to the older James taking the would-be prodigy under his wing, introducing him to contacts and helping Cole find that organic, original 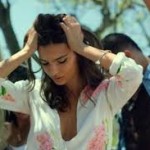 Emily Ratajkowski in “We Are Your Friends

“sound.”  Unfortunately, things get complicated when Cole ends up falling for Sophie (Emily Ratajkowski), James manager and sometimes girlfriend.  Will Cole be able to get his life together and come up with his signature sound in time for the legendary DJ concert Summerfest?  I’ve got a couple of quarters for you if you can come up with the answer to that one.

That’s one of the problems with “We Are Your Friends.”  First time director Max Joseph has a good eye with the camera but his script (co-written with Meaghan Oppenheimer) falls to easily into predictability.  It doesn’t help that the characters are all cardboard cutouts who offer little in the way of relatability for the audience.  Much like the music in the film, “We Are Your Friends” looks and sounds pretty, but is hollow on the inside.  If you can’t tell where this movie is going to finish within the first five minutes, then you’ve never watched a movie like this before.

All is not bad in the world of “We Are Your Friends.”  Although underwritten, Zac Efron exudes just enough charisma as Cole that you find yourself having something of a rooting interest in him.  If you give this guy a script worthy of his talent, Efron’s gonna break out in a huge way.  It also helps that he has several scenes with the talented Bentley, who manages to make James likable despite the superstar DJ’s many flaws and pessimistic outlook on society.  The scenes between James and Cole as they are creating their music are among the best in the movie because it’s an entertaining look at the nuts an bolts of being a DJ.

It’s when the film goes the more conventional route that “We Are Your Friends” disappoints.  Ratajkowski shows potential as Sophie, but the dalliance between her and Cole is so superficial that I had a hard time caring whether they got together or not.  It doesn’t help that Joseph shot Ratajkowski like he’s trying to get a date with her.  Seriously, during the Vegas sequence I felt more like an uncomfortable voyeur than a moviegoer.  Another problem with the Vegas sequence is that it’s shot more like a music video than a film and, although it’s pretty to look at, doesn’t provide much in the way of character development between the two young lovers.  On the plus side, Ratajkowski, like Efron, manages to prove she’s more than just a pretty face (and body).  She just needs better material.

Also inexplicable is the inclusion of a side plot involving the gang working for a shady real estate developer played with the usual menace by Jon Bernthal.  Bernthal, known by most as Shane from “The Walking Dead” is a great slime ball, but all of his scenes feel like they belong in another movie.  It’s like the filmmakers didn’t have enough material for their central story, so they decided to shoehorn in another subplot as filler.

Another plus, however, is the music.  It doesn’t reinvent the wheel, but the dance tracks will get you moving in your seat, and the finale at Summerfest, while not the emotional payoff the filmmakers want, is still a decent way to end the movie on a high note.  I have no idea as to the authenticity of the DJ culture in the San Fernando Valley or anywhere else for that matter, but for the duration of the film it felt authentic enough for me.  I just wish the characters and the story felt as authentic as the look of the film.  2 1/2 Out Of 5 On Kendog’s Barkometer!   So Sayeth The Kendog!

“We Are Your Friends” is Rated R for language throughout, drug use, sexual content and some nudity.