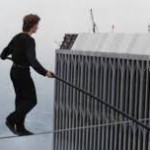 Phillipe Petit (Joseph Gordon-Levitt) has an impossible dream.  It’s 1974 and the daredevil and wire walker wants to string a wire between the nearly completed World Trade Center in New York and walk between them.  Of course, such things are illegal, but Petit and his gang of “accomplices” don’t let that stop them and Petit is soon working like some sort of spy in order to accomplish this wondrous feat.  Petit’s attempt to do this will be one of the most spectacular pieces of entertainment you’ll see in the theater this year.

“The Walk” is a highly fictionalized version of a true event.  Phillipe Petit is a real person who really performed the ultimate high wire act between the Twin Towers in 1974.  This story was told in great detail in the terrific 2008 documentary “Man On Wire.”  This movie operates almost like a fantasy, with Petit narrating directly into the camera from the top of the Statue Of Liberty.  The look of “The Walk” is very soft in nature, much like a modern day fairy tale, and it works really well with Petit’s larger than life personality.

Gordon-Levitt is wonderful as Petit, though his over-the-top French accent takes a little getting used to at first.  His Petit is a larger than life dreamer, sticking to his goal through thick and thin and coercing his confederates into helping through the sheer force of his personality and enthusiasm.  The movie may play fast and loose with the facts of the actual story, but writer/director Robert Zemeckis (“Back To The Future”) is more interested in the dramatic weight of the story.  This turns out to be beneficial to “The Walk” as sticking to the specifics of the true story would make it too much like “Man On Wire.”

Gordon-Levitt is ably aided by a talented supporting cast, especially Charlotte Le Bon as Petit’s girlfriend Annie.  She’s his anchor when things get tough, or when Petit has his rare moments of doubt.  Also good is Ben Kingsley as Papa Rudy, the veteran high wire walker who becomes Petit’s teacher and father figure.  Also doing good work are talented people like James Badge Dale and Steve Valentine as two of Petit’s primary confederates.   But this is Gordon-Levitt’s show all the way, and his Petit is a character you want to root for.

Now let’s get to the film’s co-MVP:  the special effects.  Zemeckis has been on the forefront of technology in storytelling for decades and his work in “The Walk” is no different.  The first half of the film is fairly basic, told with visual flair, but with a basic structure involving Petit’s journey to performing and his eventual journey to New York.  Once they get to the Big Apple, however, “The Walk” changes into something spectacular.  The recreation of the original Twin Towers is breathtaking and as soon as Petit and his crew get to work rigging the roof for the big walk, the production elements combine with the compelling story to become something truly special.  For all intents and purposes, you will feel like you are on top of the World Trade Center.  Add the 3D to mix and, if you find yourself afraid of heights, consider yourself warned.  This film actually serves as something of a love letter to both New York and The World Trade Center, and given the events in 2001, the imagery has even more of an emotional kick and the film is better because of it.

I’m not a big fan of 3D, but it’s absolutely essential for enjoying “The Walk.”  I saw this at the Esquire IMAX and I can’t imagine watching this film in any other format.  I have to once again thank Doug Link and the folks at the Esquire for a first rate movie going experience.  This is the place to see “The Walk” and, actually, is my favorite place to see a movie period.  If you share my enthusiasm for this format, feel free to support it by purchasing your tickets here!

“The Walk” isn’t quite perfect.  The first act lags a little at times and some of the team members are a tad underwritten, but all of that is forgotten the very moment Petit steps off the World Trade Center and on to that wire for the first time.  This a truly breathtaking experience that deserves to be seen on the largest screen possible.  Levitt brings the heart and Zemeckis brings the spectacle.  The two combined make for one terrific movie.  4 Out Of 5 On Kendog’s Barkometer!  So Sayeth The Kendog!

“The Walk” is Rated PG for thematic elements involving perilous situations, and for some nudity, language, brief drug references and smoking.