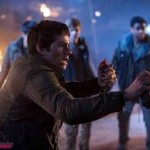 I found myself pleasantly surprised by last year’s “The Maze Runner.”  It was a more refreshing take on the Young Adult sub-genre of films, with its intensity, focus, and energy.  As the first of a proposed trilogy, I found myself eager to take the next step, following Thomas (the returning Dylan O’Brian) and the other escapees of The Glade and The Maze into further adventures.  Alas, “The Scorch Trials” while featuring decent performances and some energetic set pieces, lacks the original feel of the first film, instead choosing to imitate other superior films, a result that dilutes “The Scorch Trials” into only a passable time waster.

“The Scorch Trials” picks up where “The Maze Runner” leaves off, so if you haven’t seen the first film, you’re gonna be lost.  Thomas (Dylan O’Brian) and his friends have escaped the maze from the first film and before they can even stretch their legs, the group is whisked off to a facility presided over by a somewhat shady fellow named Janson (Aiden Gillen from “Game Of Thrones”).  Janson informs everyone that this place is a safe haven and soon everyone will be whisked away to a safe zone far from the evil clutches of WCKD (pronounced “Wicked” the evil corporation from the first film that created the maze.).   Of course everything is not what it seems and Thomas and the others soon find that WCKD is closer then they think, forcing them to flee into the desert wasteland known as “The Scorch.”  There they find danger at every turn as they search for salvation in the form a rebel group called The Right Arm.

I suspect that if you are a fan of the series “The Scorch Trials’ will be right up your alley.  The characters are still well acted (if a little underwritten) and the story moves forward at a nice clip courtesy of returning director Wes Ball.  The effects work is solid and there are a couple of memorable action set pieces that rival the ones in the previous film.

The problem I had with “The Scorch Trials” came from the lack of originality found in the story itself.  One of the delights of “The Maze Runner” came in the form of the maze and the Glade and the uniqueness of the overall situation.  The setting is what separated “The Maze Runner” from other young adult fair such as “The Hunger Games” and “Divergent.”  In the case of “The Scorch Trials” we leave the maze and find ourselves right smack in the middle of a fairly ordinary, if slickly produced, post apocalyptic story, consisting of our heroes running from both WCKD and the dangers of the scorch, all of which seem to be lifted from better films of its type.

For example, those infected with the world destroying virus known as “The Flare” are almost pixel for pixel the same zombies from “World War Z,” right down to the guttural snapping sounds they make.  There’s an action scene involving cracking glass that is almost shot-for-shot the same as the trailer sequence involving Julianne Moore in the second Jurassic Park Film.  The transports for WCKD look suspiciously like the flying Hunter/Killer machines from the Terminator films.  And so on and so forth.

None of this would matter if the characters or the story were as compelling as they needed to be.  “The Scorch Trials” suffers from a sense of sameness, a narrative deja vu that the script (by T.S. Nowlin from James Dashner’s novel) can’t seem to shake. There is a nice diversion involving a group of smugglers led by the always entertaining Giancarlo Esposito (Gus from “Breaking Bad”) and a nice performance by Rosa Salazar as Esposito’s “daughter” Brenda.  But overall the characters feel undercooked in service to a paint-by-the-numbers plot that includes the obligatory cliffhanger ending.  By the time that came I didn’t care enough to be disappointed the story had abruptly ended.

That said, “The Scorch Trials” isn’t awful, just disappointing in comparison to the first movie.  It’s nice to see veterans like Barry Pepper, Lily Taylor and Patricia Clarkson in genre fare, but their appearances are little more than just extended cameos.  Perhaps the final chapter will round things out in a rousing, logical, and entertaining manner, but as it stands, “The Scorch Trials” serves as nothing more than a mildly entertaining time waster.  2 1/2 Out Of 5 On Kendog’s Barkometer!  So Sayeth The Kendog!

“The Maze Runner: The Scorch Trials” is Rated PG-13 for extended sequences of violence and action, some thematic elements, substance use and language