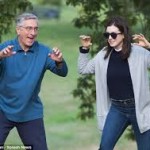 Robert De Niro is one of the greatest actors of this or any generation, but while that’s a definite fact, his roles of late have seemed to serve as more of a greatest hits tour, relying on his well-known facial ticks and thick New York accent to get by rather than sinking his teeth into some truly juicy roles.  And although he was nominated for an Oscar for his work in “Silver Linings Playbook,” I found his work in that particular film a shadow of his past performances.  That said, watching the 70-year-old De Niro fully inhabit the character of Ben Whittaker in the new comedy “The Intern” was one of the most enjoyable experiences I’ve recently had in a movie theater.

“The Intern” revolves around Ben’s attempt to re-enter the world after several years as a widower and a retiree.  He doesn’t really want a job: he’s more interested in the experience and the bond of being around other people.  When he takes a chance and interviews for a new “senior intern” program for an up-and-coming internet fashion shop, he gets the job and soon his old-school values and charm are not only winning over his co-workers, but also garnering the attention of young owner Jules Ostin (Anne Hathaway).  Ben not only becomes Jules personal intern, but also a trusted confidante and friend.

“The Intern” is one of those movies that’s all about the journey, not the destination.  If you’re looking for something revelatory from writer/director Nancy Meyers (“What Women Want,”  “It’s Complicated”) then you’ve come to the wrong place.  There is nothing here you haven’t seen before in a dozen workplace comedies aside from the intriguing senior citizen intern concept.  Hell, you can probably discern the ending by simply watching the television commercials promoting the film.

No, “The Intern”  is all about the experience in watching a bunch of pros do their thing with extremely entertaining results.  The character beats in the script feel genuine despite the predictable storyline and there is something to be said for a film that avoids (for the most part) the easy old age jokes that other films with this premise could easily fall prey to.  De Niro’s Ben is a cool character despite his age.  In fact Ben is a cool character because of his age.  He’s always seems in control, always seems patient and amused with the crazy rat race he’s entered.  There’s not a lot of growth when it comes to Ben, but that’s the point:  he’s there as a teacher and not a student, kind of a Yoda to a group of would-be business Jedi.

De Niro is matched by Anne Hathaway as Jules, who may be the nicest “hard-to-work-for” boss in the history of film.  Jules primary problem is needing to be hands-on in service to a company that’s growing too fast for her to do so on a daily basis.  She has a family as well, leading to well-acted but fairly predictable plot threads about missing family time and infidelity.  But like the other facets of the script, these tried and true tropes are palatable by the nuanced handling of the characters, particular in Jules relationship with husband Matt (Anders Holm).  There are no clear cut villains here: just fundamentally good people fumbling their way through mistakes on the road of life.

“The Intern” isn’t perfect.  In addition to the predictability of the piece, I would have liked to have seen more time given to the romantic relationship between Ben and Fiona (a terrific Rene Russo) the in-house masseuse for Jules company who matches Ben step for step in class and charm.  Russo is a terrific actress, but she’s not on screen nearly enough for my taste.  The supporting cast is also fairly underwritten, which is a shame considering the young talent involved.   Adam Devine, Zack Pearlman, Andrew Rennells, and Christina Scherer are all very good in limited screen time, but I would have liked a little more of the on screen dynamic between De Niro and these other characters.  They could have done another entire movie, equally funny, about Ben tutoring these young bucks on the finer points of life and business while learning the basics of technology in return.

But overall “The Intern” is terrific lightweight entertainment.  I’ve heard my colleagues criticize the film for its lack of depth, but I think that’s actually one of its strong points.  There’s something to be said for a frothy, bubbly piece of comedy that doesn’t require a deeper understanding of the universe to enjoy.   “The Intern” is a fantastic date movie for all ages and serves as an invigorating workplace fairytale.   4 Out Of 5 On Kendog’s Barkometer!  So Sayeth The Kendog!

“The Intern” is Rated PG-13 for some suggestive content and brief strong language.