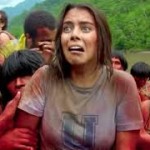 In the interest of full disclosure, I have to say I’m not a fan of Eli Roth’s brand of horror.  “Cabin Fever” had its moments, but the “Hostel” movies were soulless enterprises devoid of sympathetic characters, reveling in gore and over-the-top violence as opposed to a subtler racheting-up of the tension found in superior horror films.  In short, Roth’s films aren’t scary to me.  Roth’s latest, “The Green Inferno” is unfortunately more of the same.  He takes a fairly intriguing idea and buries it under bland (and stupid) characters and over-the-top gore that failed to engage me on anything more than a visceral level.

“The Green Inferno” refers to the Peruvian Amazon, the destination for a group of activists determined to “save” the indigenous tribes from the evil corporations attempting to bulldoze the rainforests.  Our main character is college freshman Justine (Lorenza Izzo) who, for reasons that are never made completely clear, needs to join this particular group of activists.  It is implied that her need to join may have something to do with the dreamy leader of the group, Alejandro (Ariel Levy), who despite being something of an ass, is able to convince her to join their little expedition.  With digital phones, a hacked satellite, and the help of shady locals, the activist group makes their way to Peru and, almost in spite of themselves, manage to halt the bulldozers by chaining themselves to logs, equipment, and other pieces of property belonging to the company, all the while streaming on their cell phones to keep the militia from killing them.

Soon after, the plane in which they are flying crashes in the same jungle and before you can say “this ain’t The Jungle Cruise,” the survivors are rounded up by the very indigenous tribe they were trying to save.  And guess what?  They’re cannibals!  And guess who’s on the menu?  And this being an Eli Roth film, guess what you’re gonna see?   If you said lots and lots of chopping, blood, guts, and people cooking and eating other people, ding-ding, you win the big prize!

The trouble is, Roth doesn’t bring much in the way of suspense.  Once the cannibals get a hold of our stars, they quickly become supper in some of the grossest ways imaginable.  If that’s your thing, good for you, but I require at least a modicum of empathy for the main characters for a horror movie to be effective.  The performances here range from average to awful and most of the characters are assholes, so seeing them dismembered doesn’t fill me with the sense of dread a film like this needs to be successful.  To be honest, I found myself more enthralled with the excellent make-up work of Howard Berger and Gregory Nicotero (The Walking Dead) more so then any aspect of the story, and that’s sad.

Listen, “The Green Inferno” is very well shot and the natives are potentially scary as hell.  One of the good things Roth (who both wrote and directed) does is keep the cannibals shrouded in mystery with no subtitles to impart to the audience as to what could possibly be going on inside their heads.  It would be a more effective technique if we had any sympathy for the victims.    If you are a fan of gore and horrific imagery (you know, the things Roth does well) then “The Green Inferno” is probably right up your alley.  For my part, there were just too many stupid and contrived story elements (being able to find their way to the crashed plane on foot, in the freaking jungle, after being taken from said plane by the river, while unconscious, for example) and less than stellar acting for me to care.  1 1/2 Out Of 5 On Kendog’s Barkometer!  So Sayeth The Kendog!