Dog’s Movie House: “IT” A Streamlined Masterpiece Of Horror!” 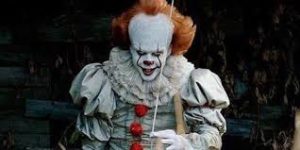 Bill Skarsgard As Pennywise The Clown In “It”

As a Stephen King fan, I can tell you that this summer’s “Dark Tower” was an absolute mess and made me wonder about the upcoming adaptation of King’s mega-novel “IT.”  “IT” just happens to be my favorite novel of all time with Derry, Pennywise, and the Losers being my favorite fictitious places and people to visit.  If you could dog-ear a Kindle, my digital copy of “IT” would certainly qualify.  Fortunately,  Andy Muschietti’s (“Mama”) big screen adaptation is not only pitch perfect for the legendary novel; it may be the best horror movie in the last twenty years!

“IT” tells the tale of seven kids, all outcasts, who come together to form “The Losers Club” in the small town of Derry, Maine.  They come together not just out of friendship, but for a common cause: each of them has encountered a demonic entity killing children throughout the town.  He appears as a spooky clown who calls himself Pennywise, but is in reality a shapeshifting monster that can take the form of his victim’s worst fear.  After realizing that individually they are easy prey for this creature, they decide to band together to end its reign of terror once and for all.

Now the first thing you need to know going into this version of “IT” is that this tells only one half of the tale.  Fans of the book know that the Losers battle Pennywise as both children and adults.  This version tell the kid’s side of the story.  The next thing is that Muschietti and screenwriters Chase Palmer, Gary Dauberman, and Cary Fukunaga change a ton of things from the book, chief among them being the setting of the children’s story in the 1980’s rather than the 50’s.  This time switch changes the whole dynamic of the type of scares Pennywise is going to offer.   You’re not going to see the Teenage Werewolf, The Creature From The Black Lagoon, or The Crawling Eye.   I can also tell you with absolute certainty that none of that matters.

This is a terrific example of an adaptation changing events around without compromising the soul and feel of the source material.  Every decision made by the filmmakers works to enhance the film and distills King’s dense (over 1100 pages folks) source material into a streamlined yet fulfilling horror masterpiece.  The hallmarks of King’s book such as Neibolt Street, The Barrens, and Pennywise’s subterranean lair are all there, but are updated in such a way that you feel like your watching something new onscreen.

The big key to this movie’s success is in the casting.  The Loser’s club is note-perfect.  Jaeden Lieberher is wonderful a “Stuttering” Bill Denbrough, the leader of the Loser’s and the one who has a personal grudge against Pennywise as it was his brother Georgie who’s taken by the evil clown in the opening of the film.  Matching him are Jeremy Ray Taylor as Ben Hanscom, the overweight newcomer who has a love of the history of Derry.  “Stranger Things” Finn Wolfhard is pitch perfect as Ritchie “Trashmouth” Tozier, the wiseass of the group.  You get Jack Dylan Glazer as Eddie Kaspbrak, the asthmatic who takes  OCD to a whole new level, and Wyatt Oleff as the uptight Stanley Uris who’s torment by Pennywise may be the most unnerving in the film.  Chosen Jacobs seems a little underutilized at first as Mike Hanlon, but he has a stronger second half of the film.  And Sophia Lills is a revelation as Beverly Marsh, the only girl in the Losers Club who captures to of the male members’ hearts but is as tough as any of the fellas.  These actors (along with a strong turn by Nicholas Hamilton as the legendary bully Henry Bowers) have such great chemistry and such incredible (albeit profanity-laden) dialogue that you feel like you know these kids and in knowing them, you care deeply about their fates.

Speaking of incredible casting, Bill Skarsgard is pitch perfect as Pennywise.  The very moment he pops up in the sidewalk drain with Georgie’s boat you know you’re not in Kansas anymore.  A whole generation of kids were scared to death by Tim Curry’s portrayal of Pennywise in the 1990 ABC mini-series.  Skarsgard seems to know this and his Pennywise is 180 degrees from Curry.  Skarsgard pulls a Heath Ledger and gives us a less jokey, more animalistic Pennywise that maybe one of the creepiest monsters every put to film.  Just the cadence of his voice is enough to make your skin crawl.  There’s something about this Pennywise that’s just a little more alien than Curry’s portrayal and I have to say it scared the shit out of me in the best of ways!

The effects here are very good and used sparingly.  Even in the finale the filmmakers hold back just enough to let Skarsgard’s performance continue to shine through.  The whole film carries an air of menace and Muschietti and his scenarists to a terrific job of dramatizing how the entire adult population of Derry is somehow under the sway of Pennywise.  There isn’t a single friendly or sympathetic adult in “IT” including the parents and I believe that’s by design.  It helps dramatize the isolation the Losers feel in their battle with Pennywise and makes their bond all the more believable.

In short “IT” is a wonderfully realized horror movie and coming-of-age film all rolled up into one with scares, humor, and emotion served in equal measure.  King’s most ambitious stand-alone work now has a cinematic adaptation it can be proud of.  Bring on Chapter 2!  5 Out Of 5 On Kendog’s Barkometer!  So Sayeth The Kendog!