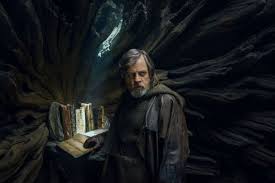 I must apologize for the lateness of this post.  I’ve been under the weather a bit lately and with all of the Christmas preparations underway it’s been a tad difficult to keep up with the site.  For that I am truly sorry.  However, you can catch up with my latest audio reviews of “Ladybird,” “Three Billboards,” and others by clicking on the link to the America Matters Media website and searching for the show “Dog’s Movie House” among the many podcasts.  That should keep you up to date as my health continues to improve.  That said, it’s time for my review of “Star Wars: The Last Jedi.”  I will keep this review spoiler-free for those of you who haven’t had a chance to check it out yet, but I will say that writer/director Rian Johnson has definitely made a film that takes some terrific story Doturns while still feeling like a Star Wars film.   It manages to darken things up a bit thematically while still providing the humor and fireworks one is accustomed to seeing in a Star Wars film.   In short, “The Last Jedi” is positively terrific!

“The Last Jedi” picks up right after the events of 2015’s “The Force Awakens.”  The Resistance is being chased off their base by the superior forces of the First Order while Rey (Daisy Ridley) tries to convince the exiled Luke Skywalker (Mark Hamill) to both come back to help the Resistance and attempt to train her in the ways of the Jedi.  But Luke is a broken man, still haunted by his failure to keep is nephew and pupil Ben Solo from turning to the dark side and becoming Kylo Ren.  Meanwhile, the Resistance, led by Leia (Carrie Fisher) is being hunted down by the overwhelming forces of the First Order led by General Hux (Domhnall Gleason).  With their ships rapidly running low on fuel, Resistance hero Poe Dameron (Oscar Isaac), sends a recovered Finn (John Boyega) and a ship mechanic named Rose (Kelly Marie Tran) on a secret mission to the casino world of Canto Bight where they attempt to find an expert hacker to help them save the fleet.

To tell you anything more would ruin the twists and turns of a fairly remarkable script that manages to turn the world of Star Wars on its ear in a very entertaining fashion.  Rian Johnson (“Looper,” “Brick”) has taken these iconic characters (especially Luke) and made them three dimensional in a way that makes them more relatable.  I know many of the die hard fans are loosing their collective minds over the many twists in the story, especially when it comes to the arc of a certain exiled Jedi Master, but I found the unfamiliar footing to be dramatically refreshing for a change, and when was the last time you could say that about a Star Wars movie?   Johnson has a habit of setting scenes that, say, resemble the throne room sequence in “Return Of The Jedi” and then thematically standing them on their head.   Yes, bigger and badder Walkers show up and there’s a rag-tag group of Rebels in tiny ships attempting to take them down, but that’s where the resemblance to the ice battle on Hoth in “The Empire Strikes Back” ends.   There are characters who make poor decisions out of desperation and those who are not necessary good or evil but somewhere in-between.  Even Kylo Renn (a remarkable performance by Adam Driver) has a twisting, turning arc that makes his character a far more compelling villain than the obviously evil Supreme Leader Snoke (an entertaining Andy Serkis).

All of the performances are superb, with Hamill picking up the MVP for giving Luke more gravitas and texture than in any of the other films (including “Empire”).  Driver is a close second with his Vader-wannabe persona becoming more twisted and more conflicted than ever.  Ridley continues to impress as Rey, especially in her scenes with Hamill and Driver.  Isaac’s Poe is a natural leader who has to confront the fact that his lack of knowledge can get people killed.  Fisher’s last go-around as Leia is as bittersweet as you’d expect as she continues to own the role that made her a star all those years ago with verve and charisma.   She will definitely be missed down the road.  Boyega as Finn has a little less to do here but his side journey to Canto Bight provides his character with a bit of growth that gives him a more mature countenance by the end of the film.  He’s no longer the bundle of energy/nervous jokester that might have put of some viewers in “The Force Awakens.”

Among the newcomers, Kelly Marie Tran is a terrific foil for Finn as Rose.  Her character has experienced loss yet Rose’s belief in the Resistance is the anchor that keep her going.  Tran and Boyega have terrific chemistry onscreen and hopefully future films will continue to pair them together.  Benicio Del Toro has a small but important role as the talented but morally ambiguous DJ, a hacker Finn and Rose find on Canto Bight.  The importance of his role is not necessarily to the propulsion of the narrative, but to demonstrate that grey area of the film, specifically when it comes to the victims of war profiteering.  Laura Dern leaves a nice impression as Vice Admiral Haldo, second in command of the Resistance and foil for Poe Dameron.  Haldo plays things close to the chest and when her moment finally comes, it’s one of the movie’s most thrilling moments.

The effects and production design are, naturally, outstanding.  The opening battle is a lyrical ballet of violence and speed and sets the movie in motion.  This movie also has one of the most outstanding light saber battles in any of the Star Wars movies.  The music, by the legendary John Williams, is as stirring as ever, although he repeats a few themes used in “The Force Awakens.”  That said, those themes are used to equally stirring effect.  That said, this is one of the few Star Wars films where the character drama matches the battles between ships and walking battle tanks.  In many places the character beats enhance the action, giving the viewer a more emotional stake in the outcome.  As a result you feel like you’re watching and actual battle rather than a slickly produced video game.   And those twists!  Oh those twists!

“Star Wars: The Last Jedi” is not only one of the best Star Wars films ever made, it’s also one of the best films of the year, period!   It will reward you with multiple viewings and if you do see it, see it on the biggest screen possible.  I recommend the Esquire IMAX downtown.   Doug Link is a fantastic host and the sound and picture alone is worth the price of admission.  I recommend the 2D showings but I imagine 3D fans will get a kick out of the complex space battles.  Either way, it’s an experience you won’t soon forget.  You can get your tickets here.   5 out of 5 on Kendog’s Barkometer!  So Sayeth The Kendog!