Dog’s Movie House: “Shape Of Water” Outstanding, “All The Money In The World” Solid Entertainment!

Howdy Folks!  It’s The Kendog with a couple of new releases you should check out! 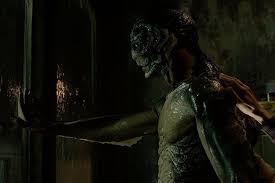 Doug Jones As The Creature In “The Shape Of Water.”

Awards season is rapidly approaching in the film business and while “Star Wars: The Last Jedi” is cleaning up the box office, several other new films are vying for both your dollars and a piece of the awards pie.   Into this mix are two standout films, both made for adults.  Guillermo Del Toro’s latest, “The Shape Of Water” makes it easily on to my top ten list this year, while Ridley Scott’s “All The Money In The World” is a fine film but an even more amazing filmmaking accomplishment in that Scott and his team had to reshoot entire sections of the film just months before its release, replacing the fired Kevin Spacey with Christopher Plummer as J. Paul Getty.

Let’s start with “The Shape Of Water,” writer/director Guillermo Del Toro’s adult fairy tale set in 1962.  It stars the incredible Sally Hawkins as Elisa Esposito, a mute janitorial worker at a top secret government lab in Baltimore.  Her life is unremarkable but her days are aided by the presence of her best friend at work, Zelda (Octavia Spencer) and at home by her caring, sensitive roommate Giles (Richard Jenkins).  One day her life is changed forever when an aquatic humanoid creature is brought into the lab by the sadistic Richard Strickland (Michael Shannon) who has no compunction about torturing the creature for his own ends.  In the meantime, Elisa develops a bond with the creature deep enough devise a plane to help it escape from its jailers.

And that’s all I’m gonna tell ya.  “The Shape Of Water” is a remarkable film, effortlessly combining whimsy, suspense, comedy, and even horror into a wonderfully crafted work of cinematic storytelling.  This is Del Toro at his best: keeping the fantastic grounded in relatable and movie character work.  Hawkins is wonderful as the mute Elisa, a woman who feels as out of place in the world as the creature with which she ends up falling in love.  Spencer and Jenkins are terrific in supporting roles, each with small, yet important arcs of their own.  I was especially impressed with Jenkins and how he handles the role of a closeted gay man in the early 1960’s.  Shannon is a right bastard (and that’s a compliment to his acting skills) as the control freak Strickland, a hissable villain who nonetheless has some hidden complexities of his own.  And longtime Del Toro collaborator Doug Jones does absolutely magnetic work as the creature, getting miles of emotional expression with just his eyes and mannerisms alone.  Fans of his work in “Hellboy” will recognize the design of the creature as similar to Abe Sapien, but there are more than enough differences to make the creature into something boldly unique while at the same time honoring such classics as “The Creature From The Black Lagoon.”

All in all, “The Shape Of Water” is one of the best films of the year, but beware: it’s very adult in it’s presentation of such subjects as sex, torture, and certain scenes of violence.  It is definitely an R-Rated film, so leave the kiddies at home.  5 Out Of 5 On Kendog’s Barkometer!

Next we have “All The Money In The World,” Ridley Scott’s dramatization of the real life 1973 kidnapping of John Paul Getty III, grandson of J Paul Getty, the richest man in the world, and the attempts of Paul’s mother Gail (Michelle Williams) to get him back despite the reluctance of Getty to pay the ransom.  Getty (Christopher Plummer) instead employs the use of his head fixer Fletcher Chase (Mark Wahlberg) to potentially rescue the young Getty without paying a single dime.

As a thriller, “All The Money In The World” is a rather rote exercise, particularly for anyone who is familiar with how the story played out.  But as a character study, particularly of the elder Getty, this film is positively fascinating.  As portrayed by Plummer, Getty is a stingy, spiteful old man who looks at everything as a chance to negotiate in his own favor, including the life of his grandson.  At one point he is only willing to pay a million dollars of the ransom because that is the highest amount that can be deducted on his tax return.  I don’t know how Spacey would have been in the role, but Plummer knocks it out of the park here and every moment the veteran actor is on the screen is pure magnetism.

The rest of the movie suffers a bit when Plummer is off screen despite Scott’s trademark flair for visual filmmaking.  The script by David Scarpa (from John Pearson’s book) has trouble weaving suspense out of a narrative whose ending is already known.  Williams is very good (although her accent slips here and there) as Gail, a woman who’s supposed allies are just as bad as the people who hold her son.  Wahlberg is fine as far as his performance goes, but his Fletcher Chase is kind of a non-starter here.  For all of his alleged expertise, Chase doesn’t really do anything of any consequence.  He even makes a few egregious errors that rightfully piss Gail off.

This is Plummer’s movie, though, through and through.  More age appropriate than Spacey, his snake-like countenance provides a jolt of energy through the entire movie.  Getty may be a bastard, but Plummer makes you love every minute he’s onscreen.  More a film about family dysfunction than a true thriller, “All The Money In The World” serves as a compelling drama and a very entertaining time at the movies.  4 Out Of 5 On Kendog’s Barkometer!  So Sayeth The Kendog!