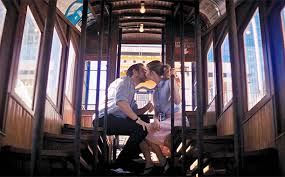 It’s definitely a tale of two movies this week.  I finally caught Oscar favorite “La La Land,” and I have to say it’s a darn sight better than any of the new releases this last week.  Is it worth the fourteen Oscar noms?  Well that’s a matter of opinion and I’ll let you know mine in a minute or two.   I can say “La La Land” is a vast improvement over the final (hopefully) installment of the long running “Resident Evil” franchise.  If this were a boxing match between two directors, Damien Chazelle (“Whiplash,” “La La Land”) would beat Paul W.S. Anderson (“Mortal Kombat,” “Resident Evil”) down like a government mule within a single round.

“La La Land” is writer/director Damien Chazelle’s follow-up to his Academy Award-winning “Whiplash” and pretty much reinvents the modern movie musical.  The film tells the tale of Mia (Emma Stone) and Sebastian (Ryan Gosling), two young people trying to achieve their dreams in Los Angles.  Mia works at a coffee shop at a Hollywood studio while trying to become a successful actress, while Sebastian wiles away his nights playing piano at dive bars and restaurants while dreaming of opening a jazz club of his own.  The two meet, fall in love, and try to support each other’s dreams, all while making their way through exquisitely constructed musical numbers that represent their emotions during the course of their courtship.

Now for the first half of the film, “La La Land” proceeds like a traditional love story, but at about the two-thirds mark it takes a sudden left turn and becomes something a little different and a little deeper.  To tell you anything else would be to give away some of the narrative delights “La La Land” provides.  I can tell you that the musical numbers are wonderful, and this is coming from a fella who isn’t particularly fond of musicals.  The cast is terrific, with Emma Stone being the standout.  She has a decent singing voice, but it’s in the film’s second half when she gets to stretch her dramatic chops where she really gets to shine.  Gosling is her match dramatically and has some wonderful moments while both playing the piano and dancing, but I wasn’t too fond of his whispery singing voice.  It’s not a deal breaker, mind you, but it can be a little distracting at times.   There’s good supporting work from John Legend as a colleague of Sebastian’s and a short but very funny cameo by “Whiplash” star J.K. Simmons as the owner of the bar at which Sebastian plays the piano.

Above all, “La La Land” is all about a talented director’s mastery of his film.  Chazelle has a clear vision for this movie and he directs the hell out of it.  It may not be for everyone from a stylistic standpoint, but you can’t deny “La La Land” is a wonderfully constructed film that proves “Whiplash” was not a one-time fluke.  I can’t wait to see what he does next.  Now does “La La Land” merit it massive haul of fourteen Oscar nominations?  I have no idea, but it’s still a damn fine film.   4 1/2 out of 5 on Kendog’s Barkometer!

On the opposite end of the spectrum you have “Resident Evil: The Final Chapter.”  Paul W.S. Anderson’s final entry into the dramatically mediocre yet highly profitable film series based on Capcom’s popular line of video games is a prime example of “short-attention-span-theater” filmmaking that confuses kinetic movement with actual innovation.  Generally speaking, I’m a soft tough with most films given how much work goes into putting them onscreen, but I have to say that this Resident Evil film is absolutely terrible.

I won’t bore you with the plot details other than to tell you that Alice (Milla Jovovich, who deserves so much better) the ass-kicking rebel/genetic experiment is continuing to fight against the evil Umbrella Corporation and its armies of undead which are now threatening to take over the world.  In her way are the fanatical Dr. Isaacs (Iain Glen, probably wishing he was back on the set of “Game Of Thrones”) and the monotone, sunglass-wearing-at-night Wesker (Shawn Roberts).  Returning to help Alice are Ali Larter’s Claire, Eoin Macken’s Doc, and Ruby Rose’s Abigail, among others.

I found myself not really caring about the plot or the characters because Anderson’s style of directing was so damned distracting.  It was like he mainlined about a million gallons of Jolt Cola before picking up the damned camera.  There are enough instances of shaky-cam and quick edits to give a fella a seizure.  I would love to just sit back and turn my brain off for an entertaining B-movie-style horror flick, but this film actually gave me a headache.  And that’s without even mentioning the earsplitting volume at which every crappy jump scare and red herring is set.  It’s easy to get you to jump out of your seat when the slamming of a door sounds like a shotgun being fired off next to your ear.  The filmmakers don’t even have to good sense to give the film a closed ending, leaving it open for “Resident Evil: The Final Chapter. . .We Really Mean It This Time!”  This is one of those films that even die-hard fans will have trouble appreciating.  As for the rest of you folks, do yourself a favor and stay the hell away!  1 out of 5 on Kendog’s Barkometer!  So Sayeth The Kendog!