Howdy Folks!  It’s The Kendog with a look at “Operation Finale!” 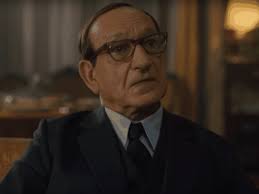 As more an more of the World War II generation are leaving us it will be up to historians and, yes, filmmakers to keep an accounting of that devastating time period so history doesn’t repeat itself.  Adolph Eichmann was a true monster in human skin: on of the primary architects of Hitler’s Final Solution and thus responsible for the Holocaust.   There have been stories about Eichmann brought to the big screen before, but “Operation Finale” deserves to be seen because it demonstrates quite effectively the banality of evil in a way that audiences may find disappointing if they don’t know what they’re looking for.

“Operation Finale” tells the tale of the group of Israelis led by Peter Malkin (an outstanding Oscar Issac) and their efforts to bring Eichmann (an equally excellent Ben Kingsley) from Argentina to Israel for trial.  Every single one of the Israeli team lost someone during the Holocaust and Malkin’s loss of his sister and her children will come to have chilling consequences later in the film.   The team has to infiltrate Buenos Aires and basically kidnap Eichmann (now living under another name) right out from under the powerful Nazi community and the Buenos Aires police.

The movie is set during that harrowing week in 1960 and the drama is all the more gripping in that it takes place in a way that feels understated.   No loud chases or gun battles: just conversations and plans and counterplans and lots of emotional tension.  Most of this team, including Malkin, would gleefully put a bullet in Eichmann’s head, but their mission is for a live capture so the escaped Nazi can stand trial in front of his accusers and victims.

Part of what makes “Operation Finale” so different is that the antagonist seems so ordinary.  Kingsley plays Eichmann like a befuddled bookkeeper most of the time, an accountant who was simply following orders and keeping the ledgers nice and tidy.  That those ledgers contained the names of people meant for death is of little concern to Eichmann who professes to have taken action in defense of his country.  There’s only one scene when the real Eichmann makes it through the façade, where the monster behind the man decides to show his face and Kingsley plays the moment to perfection.   He is equally matched by Isaac, whose Malkin is something of a wildcard, with his methods being considered too unorthodox for the rest of the team.  He particularly bumps heads with lead interrogator Zvi Aharoni (Michael Aronov) whose traditional interrogation techniques are moving too slowly for Malkin’s liking.

Also in fine form are Melanie Laurent as a nurse turned spy brought along to help keep Eichmann sedated during his long journey to Israel and Nick Kroll as Rafi Eitan, the overseer of the group and also often Peter’s conscience.  Kroll, so hilarious earlier this year in “Uncle Drew” shows some surprisingly robust dramatic chops along with providing some of the more humorous moments during the film.   The rest of the cast, while capable, mostly falls into the background, but the story by Matthew Orton never gets bogged down in too much exposition.   Director Chris Weitz adeptly manages both drama and suspense without overcooking either and the result is a wonderfully understated thriller that manages be entertaining and inspiring at the same time.  This film may not be gritty enough for some, but the human drama, particularly between Eichmann and Malkan, more than make up for it.  This is a very good film that deserves to be seen.   4 Out Of 5 On Kendog’s Barkometer!  So Sayeth The Kendog!