Dog’s Movie House: “Now You See Me 2” Shouldn’t Be Seen Once! 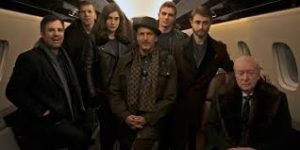 The Horsemen Are Back In “Now You See Me 2!”

The original “Now You See Me” was a diverting bit of fluff featuring a fine cast of actors having a good time with the ridiculousness onscreen.  More importantly, the film was about the ins and outs of magic and illusions.  Now since “Now You See Me” made a global killing at the box office, here comes the inevitable sequel and, unfortunately it’s as inevitably mediocre as one would expect.

“Now You See Me 2” takes place a year after the events of the first film.  The Horsemen are scattered to the wind, awaiting instructions from their mentor, FBI agent Dylan Rhodes (Mark Ruffalo).  The Horsemen are chafing at their quarantine, especially the leader of the group J. Daniel Atlas (Jesse Eisenberg in full-on arrogant mode).  Soon Rhodes pulls the team together, including Atlas, Jack Wilder (Dave Franco) and Merritt McKinney (Woody Harrelson).  Rhodes also brings in a fourth member, a sassy illusionist named Lula (Lizzy Caplan, far and away the best part of the movie) for no other logical reason than to replace Isla Fisher’s Henley from the first film.   Together they attempt to crash a tech mogul’s presentation to steal a piece of potentially devastating technology.  However, they are ratted out by another mogul, one Walter Mabry (Daniel Radcliffe) forces the Horsemen to work for him.  The rest of the story plays out with twists, turns, revelations and set pieces that add up to well. . .not much I’m afraid.

The main problem for me with “Now You See Me 2” is that the script (by normally reliable scribe Ed Solomon) seems to be very unfocused.  Let’s take the mysterious organization known as “The Eye.”  Are they a Freemason’s for magicians?  A secret order of freedom fighters against injustice who just happen to use illusions as weapons?   That part is never made clear to us and if that’s by design, it’s a technique that’s frustrating as hell.  The script keeps trying to tie threads together with narrative string too short to make the distance and the juggling of so many balls in the air really took me out of the movie.  By the end of things I didn’t give a tinker’s damn what happened to any of the characters and that’s a death blow to a movie like this.

The cast does the best with what they have to work with, but many of the characters are underused.  Ruffalo gets the best arc as Rhodes, and fans of the first film will remember his history with Morgan Freeman’s Thaddeus Bradley and that particular storyline gets an unusual payoff here.  Freeman is a terrific actor, but his Bradley, much like the first film, seems to exist simply to show up, say a couple of mysterious things, and then leave.  It’s safe to say at one point he escapes from jail but the details of his escape and the method of involvement coming from the Rhodes character is unbelievably stupid.  I won’t provide details, but trust me when I say you’ll understand when you watch the movie.

The other Horsemen are given very little to do in this overstuffed film.  Eisenberg’s Atlas comes across as even a more know-it-all prick than in the first film, primarily because Atlas doesn’t get enough screen time to balance things out.  Franco has some good chemistry with Caplan, but there aren’t enough scenes with them together to make much of an impact.  Harrelson has some fun in dual roles as Merritt and his slimy twin brother, but again, too many balls in the air to make much of an impact.

Director Jon M Chu (“GI Joe: Retaliation”) puts together a slick looking movie, but without a compelling story it comes off as all style, no substance.  Not even the illusions are terribly compelling, repeating the problem of the first film by explaining some of the tricks and then pulling off other illusions without a word of explanation because, you know, they can’t be explained!  CGI can be a wonderful thing, but when you’re dealing with a movie about stage illusionists using CGI to create illusions that can’t possibly be created on stage is a major cheat.  You either make them real magic-users (yes, I know how ridiculous that sounds) or you have them explain all of the illusions, not just the ones snare the bad guys.

Overall, “Now You See Me 2” is an overstuffed mess that strands a bunch of talented actors in a film I’m not sure anyone wanted to see.  There are seeds of a potentially good film here, but the fact that there is so much wasted talent on display is enough to make me grind my teeth in frustration.   See it at your own risk!  2 Out Of 5 On Kendog’s Barkometer !  So Sayeth The Kendog!