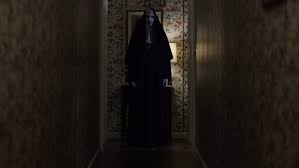 An Uninvited Guest In “The Conjuring 2”

A lot of sequels unfortunately follow the law of diminishing returns.  (See my review of “Now You See Me 2” here as proof)  Fortunately there is one filmmaker out there who knows that having a number after the title of your film doesn’t mean the finished product has to be a piece of brain dead dreck when it arrives in theaters.  That filmmaker is James Wan and he is rapidly becoming the preeminent voice in cinematic horror.  “The Conjuring” was one of the best horror films in recent memory and I’m happy to report that, while not quite in the same class as the original film, “The Conjuring 2” is close enough in quality to its predecessor that it is guaranteed to scare you witless in all the best ways.

“The Conjuring 2” takes place in 1977 to a small house in North London where Peggy Hodgson (Frances O’Connor) is raising four kids by herself. That in itself can be a hardship, but things get progressively worse when her young daughter Janet (a terrific Madison Wolfe) draws the attention of a malevolent spirit who used to live in the house.  Things go from “bump in the night” to “Holy Crap” in a hurry, forcing Peggy to seek the assistance of the Church.  The Church, however, can do nothing without proof, so they go to the preeminent paranormal investigators of the time, Ed and Lorraine Warren (Patrick Wilson and Vera Farmiga).  If you recall, the Warrens were the investigators from the first film but have changed a little, particularly Lorraine, whose experience in the Amityville house that begins the film have left her wary about conducting any further investigations.  The Warrens go anyway at the behest of the Church, with the condition that they are there only as observers and collectors of information.  Of course, that doesn’t hold for very long and soon the Warrens are not only fighting for the lives of the Hodgson family, but their very own as well.

Now this is one of those “based on a true story” type of films, but I never really put a whole lot of stock in that advertising technique.  The Warrens have been polarizing figures of the paranormal community for decades given that their most famous case, the Amityville Haunting, was proven to be a hoax.  But this isn’t a story about the real Warren family, and the fictitious characters based “on real people” do the job just fine.

Writer/director James Wan is really in his element here, crafting scares both large and small by building the tension to an almost unbearable levels and then letting it loose on the audience in sometimes the most unexpected of ways.  Wan adheres to the first rule of good horror:  you have to relate to your characters to experience their fear and the Hodgson family is very relatable.  A working class family with a single mother in 1970’s England, you automatically sympathize with them before the first spook makes an appearance.  It also helps that the family reacts normally when confronted by a scary apparition: they get the hell out of the house and run to a neighbor.  (Although that doesn’t help nearly as much as you would think.)  You find yourself rooting for the Hodgson family because they are both sympathetic and (unlike most horror films) not mind-numbingly stupid in their actions.

The Warrens are sympathetic characters as well and as played by Wilson and Farmiga, some of the stronger protagonists in horror cinema.  Their mission is backed by their faith, but it’s in a way that doesn’t seem like they’re preaching to the audience.  It’s a detail that seems small, but it makes the Warrens more likeable.  They’re not superheroes: just regular folks with a bit of talent, a lot of knowledge, and a lot of faith and it is these weapons they take into battle against some seriously scary stuff.  As long as there are good stories to tell, I’ll buy a ticket for any case involving the (cinematic) Warren family.

As of this particular case, the ghosts are particularly scary.  The first is one Bill Wilkens (Bob Adrian), an old codger who is pissed that the Hodgens have moved into his old house.  He’s the chap that messes with young Janet, even possessing her a la “The Excorist” in some of the films creepier scenes.  Bill is the ghost the Warrens are called upon to confront and remove from the house and he’s dangerous enough to front line a film of his own.

But there is another spirit involved, one of a more demonic nature that has a more personal connection with the Warrens, especially Lorraine.  Whoever designed this beastie deserves some credit in the imagination depart.   This ghost looks like a demonic nun, complete with rumpled habit, chalk white skin, yellow eyes and a mouth full of sharp teeth.  This is one scary spirit and Wan uses the jump scares involving her to maximum effect.  I’m not ashamed to say that the ushers at the theater had to metaphorically pull my off the ceiling several times when she was around.

Another thing James Wan does so well as that he structures his scares so they don’t take place exclusively at night.  There are just as many scares to be had in broad daylight as there are to be had in the shadows of darkness, and that ability makes sure the audience never feels safe, even when the sun comes up.

The only ways “The Conjuring 2” doesn’t compare favorably to the first film is that it adheres to the tenets of “The Exorcist” complete with the possessed kid.  Don’t get me wrong: those scenes are mostly terrific, but the callbacks to the 1974 classic are a little difficult to avoid.  In addition, the reasons for demon nun’s presence at the England haunting are a little vague.  She has some connection to Lorraine, but the motivations for her aiding Bill Wilkens is a little murky at best.  (I mean, other than she’s freakily evil.)

That said, those are minor nitpicks in a film that is destined to become one of most well regarded horror sequels in history.  If you love high quality horror, “The Conjuring 2” is one of the best movies out there this summer!  4 ½ Out Of 5  On Kendog’s Barkometer!  So Sayeth The Kendog!

“The Conjuring 2” is Rated R for terror and horror violence