Dog’s Movie House: Catching Up In The New Year! 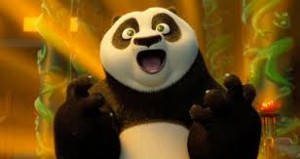 First, a note of apology:  Sorry I’ve been gone for a while, but some health issues forced me to put the Movie House on hold for a bit.  Fortunately it didn’t stop me from seeing some movies and now that things are all better, it’s time to get back to it.  I’m not going to catch up on everything over the last couple of weeks because, let’s face it, there’s a lot of crap out there.  So my advice to you is simply to avoid seeing dreck like “The 5th Wave” or “Dirty Grandpa.”  What I will do with this article is simply catch up on a few films that are probably worth your time. Soooooo. . . .on with the show!

First up is “Kung Fu Panda 3,”  I must admit, I have a soft spot for the Kung Fu Panda movies, probably because I’m built a little more like Po (Jack Black) than I care to admit.  I’ve always identified with Po because I’m the same type of dude who loves Kung Fu but doesn’t have the aptitude for it.  In this third movie, Po has become the Dragon Warrior and saved the valley twice, but finds out that, as a teacher, he kind of sucks.  Shifu (Dustin Hoffman) is retiring and thinks it would be a great idea for the Dragon Warrior to grow by filling his shoes.

That all gets put on hold when an ancient enemy and former partner of Oogway, the wise (and now deceased) turtle and master of Kung Fu, shows up out of the netherworld to raise havoc on the entire land.  His name is Kai (J.K. Simmons), a massive bull who has the ability to steal the chi, or life force out of his victims and use the bodies as his own personal army.  At the same time, Po is reunited with his biological father Li (Bryan Cranston), who takes him back to the secret panda village to teach him the secrets of harnessing one’s chi in time to take on Kai.  In return, Po has to train his panda brothers and sisters in the art of Kung Fu so that they can defend themselves against Kai’s ever-increasing army.

“Kung Fu Panda 3” is a nice variation on the formula that made the other two films so much fun.  The lessons on self-worth along with teamwork and friendship permeate the film.  This movie is also funnier than its predecessor, though not quite so inspired as the first.  The additions of Simmons as the villain and Cranston as Po’s dad are masterstrokes of vocal casting and I was especially amused with the side story involving Li and Po’s adoptive father Mr. Ping (the great James Hong).  Some of their verbal interplay is among the best in the movie.

As for the returning cast, Black is in fine form as Po, while Hoffman seems to be having a ball as Shifu.   The other cast members don’t get a lot to do, but each has a moment to shine, particularly Seth Rogen’s Mantis, who’s as quick with the one liners as he is with his little clawed feet.  The animation is gorgeous and the attention to detail in the Kung Fu fighting scenes is, as always, wonderfully aware of its Asian influences.   A fine family film and a great capper to a fun trilogy.  4 Out Of 5 On Kendog’s Barkometer!

For those of you who know me well, you know I wasn’t a big fan of the movie “Abraham Lincoln: Vampire Hunter.”  Too much CG, too much silliness, and underdeveloped characters that got in the way of what could have been a wonderfully goofy movie.  Now, from those same minds we get “Pride And Prejudice And Zombies,” which takes Jane Austen’s classic take on romance and class and throws it in a blender with a Black Plague-inspired zombie apocalypse.    So what’s the verdict?

Actually it’s quite entertaining, for the most part.   “Pride” manages, for at least the first two thirds of the film, to keep both the elements of Austen’s novel and the zombie stuff (from Seth Graham-Smith’s popular mashup novel) working together in a state of harmony that shouldn’t exist.  Credit goes to writer/director Burr Steers (“Igby Goes Down”) for maintaining a serious atmosphere in which the excellent cast has to work.  The film kind of falls apart in the third act, with huge explosions, slow motion action shots we’ve seen in a million other movies, and an ending that promises more than it can possibly deliver (seriously, is anyone lining up for a possible “Pride And Prejudice and Zombies: Part 2), but until then the film delivers as a fine piece of entertainment.

The cast is uniformly excellent, with Lily James stealing the show as the second Bennett daughter, Elizabeth.  James, so good in last year’s “Cinderella” is making a case for being the go-to young actress in period dramas.  I’d very much like to see her in a more modern role, just to see her spread her wings a bit.  She gets excellent support from Sam Riley as Darcy, Jack Huston as George Wickham, Douglas Booth as Mr. Bingley, and the excellent Matt Smith as the very funny Parson Collins, a man whose family connections entitle him to put a hilarious full-court press on Elizabeth Bennett in terms of marriage.  It’s also nice to see “Game Of Thrones” alums Charles Dance and Lena Headey in small but pivotal roles.  Every time they’re on screen it raises the tone of the piece.

The effects and production are decent and the CGI is judiciously used, drawing you into the film rather than pushing you out of it.  As mashups go, you could do a lot worse and I recommend “Pride And Prejudice And Zombies” as a solid matinee.  3 Out Of 5 On Kendog’s Barkometer!

Finally as part of our catch-up section this week we have the latest from the Coen brothers.  This is “Hail, Caesar” and is one of the lighter efforts from Joel and Ethan Coen.  That’s not to see this movie isn’t entertaining as hell.  It most certainly is, but it lacks the narrative depth of previous efforts like “No Country For Old Men” or “Fargo” or “True Grit.”  That’s perfectly fine with me, as a madcap comedy with no other message can be a tonic for any moviegoer’s soul.

“Hail, Caesar,” essentially chronicles the day in the life of a studio “fixer”  in the early 1950s named Eddie Mannix (Josh Brolin).  He’s the kind of fella who takes care of all sorts of off-the-books business, dealing with drug addicted producers, movie stars about to have children out of wedlock, gay affairs about to make the tabloids, etc.  Mannix also runs the studio’s above the board operations as well, so his day is hectic from the time he gets up to the time his head hits the pillow.  It’s also guilt inducing enough for Mannix to go to confession every single day, prompting even the priest to tell him “it’s just too much.”

Things get worse for Mannix when his number one star, a lunk-head named Baird Whitlock (the excellent George Clooney) is kidnapped by a group of individuals calling themselves “The Future”  Mannix has to deliver the ransom and get Whitlock back to the set in time to finish their most expensive picture to date, the biblical epic “Hail, Caesar.”

The story here is not that deep.  The mystery surrounding Whitlock’s abductors is revealed about twenty minutes into the movie and that reveal is mostly played for laughs.  There are a lot of narrative threads that aren’t given a great amount of time and either drop off completely or are resolved in a fairly perfunctory manner.  But that’s not the point.  The point is showing day in the life of a studio fixer in Hollywood, and in that “Hail, Caesar” succeeds beautifully.  Mannix is very good at what he does, so it doesn’t surprise me that he’s able to solve most of his problems in short order.  These problems allow the Coens to illustrate a humorous take on what life was like at a movie studio during this particular era and that look backstage is more than entertaining enough to carry the entire film.

The cast, as always in a Coen brothers film, is uniformly excellent.  Along with Brolin and Clooney, you get great work from Ralph Fiennes, Scarlett Johannson, brief but amusing turns by Frances McDormand, Jonah Hill, Clancy Brown, and the Highlander himself, Christopher Lambert.   Tilda Swinton turns up in a dual role as twin gossip columnists and Channing Tatum shows his stellar dance moves as a Gene Kelly inspired musical star.

But the real scene-stealer of “Hail, Caesar” is a young man named Alden Ehrenreich, who plays cowboy star Hobie Doyle.  With his laconic drawl and honest face, Ehrenreich is the embodiment of the 1950’s cowboy star, ala Roy Rogers or Gene Autry.  So naturally the studio casts him in an English costume drama to widen his exposure, with less than stellar results.  The scenes between Hobie and Fiennes Laurence Laurentz, the film’s director, are fall down funny.  I can’t wait to see what Ehrenreich does next.

So overall, “Hail, Caesar” may not be as classic Coen brothers film, but there is more than enough to keep one entertained.  Between the performances, the attention to period detail, and a witty, light on its feet script, “Hail, Caesar” serves as one hell-of-a-time at the movies.  4 Out Of 5 On Kendog’s Barkmeter!   So Sayeth The Kendog!