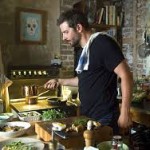 You know your enjoyment of a movie is problematic when you find yourself wishing you were watching a different movie involving similar subject matter.  As I watched Bradley Cooper’s latest, “Burnt,” I couldn’t help but think I’d much rather be watching “Chef” the delightful cooking comedy from last year.  Despite a good cast and lots of shots of delectable-looking entrees, “Burnt” suffers from an unsympathetic protagonist and a too-tidy resolution to problems that require more cinematic depth.

“Burnt” tells the tale of Adam Jones (Bradley Cooper) a former superstar chef who’s descent into drugs and other vices left him bereft of any professional or personal prospects.  A former star in Paris, Jones does penance in New Orleans shucking oysters before heading to London to seek culinary redemption.  Wheedling, cajoling, and intimidating his way into the restaurant of his old friend Tony (Daniel Bruhl) he sets about his task of winning his third Michelin Star, a task complicated by his inability to maintain relationships, including a love/hate relationship with Helene, a new chef with a chip on her shoulder to match her talent.

How much you enjoy “Burnt” will depend solely on how much to sympathize with Jones.  Cooper does a good job portraying a diva, but the script by Steven Knight (Eastern Promises) does very little to establish any sympathy for Jones as a character.  He spends most of the movie as something of an antisocial dick and while we are told that he’s gone through hell and back, we are never shown any of it so all we have is arrogance onscreen.  I found myself decidedly not invested in whether or not Jones got his third star.  As a result my enjoyment of “Burnt” was somewhat truncated.

The performances are fine across the board.  Miller (reuniting with “American Sniper” co-star Cooper) is probably the most relatable of the bunch, providing a nice balance of strength, vulnerability, and rugged sensuality to the role.  Were the movie about Helene I think I might have been more emotionally invested.  Bruhl is also very good despite his thick accent and his reluctant support of Jones turning into genuine affection is one of the film’s highlights.  I also enjoyed Omar Sy (Jurassic World) as Michel, the sous-chef and former best friend of Jones who is hiding a secret pain of his own.

The film is at its best during the kitchen sequences where the hustle, creative, and sheer chaos come to life in exhausting detail.  Director John Wells (The Company Man) brings a manic energy to the proceedings and a sense of atmosphere so pervasive that you’ll be tempted to wipe the sweat from your brow.  There is something fascinating about watching the behind-the-scenes at such a fancy restaurant where the chefs working “the pass” resemble artists more than cooks.  I found it interesting that enjoyment of food, either in the preparing or ingesting of it, plays very little role here.  It’s all about presentation in this rarified culinary air and it’s something I’ve never completely understood.

I think what bothers me most about “Burnt” is that Jones is never really called into account for his actions during the course of the film.  In fact, the script acts like something of a divine intervener in terms of saving Jones from the consequences of his own bad choices, making the lessons he’s supposed to be learning nothing of any real consequence.   The film sets up several potentially devastating situations for Jones, only to have something nearly magic pull his ass out of the fire in the final third of the film.  There is very little in the way of observable personal growth in Jones and the fact that he’s an arrogant prick throughout the film doesn’t help matters any.  Cooper does what he can, but the script really hamstrings him.

Overall, “Burnt” is slick and polished, but lacks the relatable human element to really sink your teeth into the story.  If you can get past the unlikable nature of the main character, you might enjoy “Burnt” a whole lot more than I did, but those of you who share my objections will be better off satisfying their cinematic palette somewhere else.  2 1/2 Out Of 5 On Kendog’s Barkometer!  So Sayeth The Kendog!

“Burnt” is Rated R for language throughout