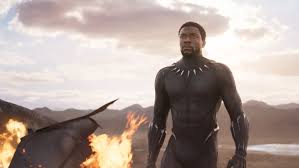 Ever since Chadwick Boseman suited up as the Wakandan superhero The Black Panther in “Captain America: Civil War” folks have been quite excited to see T’Challa return in a solo film of his own.  Now that time has finally arrived and my fellow critics are falling all over themselves telling everyone how revolutionary “Black Panther” is, calling the film a game changer and as important to racial equality as King’s March In Selma. (Well, maybe not that last part, but you get the idea.)  Now as a middle-aged white dude I’m in no position to speculate about the influence this movie will have on African-American moviegoers.  I do know that “Black Panther” is an excellent film that does several different things from other Marvel films while firmly entrenching itself in the greater Marvel Universe.  As good as “Black Panther” is, it’s still just a movie though.

“Black Panther” takes place just after the events of “Captain America: Civil War” with T’Challa (Boseman) returning to the hidden and technologically advanced African country of Wakanda to take his place as king after the death of his father T’Chaka (John Kani) in “Civil War.” When he gets there he faces several challenges, foremost among them the appearance of Erik Killmonger (Michael B. Jordan), and Wakandan of American decent who challenges T’Challa for the throne.  T’Challa also has to deal villainous arms dealer Ulysses Klaue (Andy Serkis, having the time of his life) a longtime enemy known for stealing the mineral Vibranium, the secret to the power and technology of Wakanda.

What follows in a comic film much more layered than many of its predecessors in the Marvel Cinematic Universe.  “Black Panther” touches upon such subjects as isolationism, colonialism, the beliefs of sons in their fathers, and what it takes to become a leader.  It also addresses the issue of how debilitating anger and rage can be no matter how intelligent you are.

Most of my colleagues have spoken at length about the unusual nature of this film having an a primarily all black cast as well as a talented writer/director in Ryan Coogler who also happens to be black.  In my humble opinion it’s really not that big of a deal in terms of the story.  “The Black Panther” comic has its roots in African culture so it shouldn’t be surprising that the film should as well.  As for Coogler, he’s already proven his immense talent on films such as “Fruitville Station” and “Creed” so is it any surprise he’s able to bring this story to life in such an engaging manner?   Would the media be falling all over Coogler in the same manner had he been chosen to helm a primarily white superhero film like “The Fantastic Four?”  It’s great that the cast of African Americans, both male and female, get to shine in a fashion unlike many other films, but in this movie the message serves the story and not the other way around.

This is fortunate because all of the politicized and racial noise goes away once the movie starts.  Coogler, who co-wrote the smart script with Joe Robert Cole, sticks to telling the story without hammering home the messages with the subtlety of a sledgehammer to the head.  The journey of both T’Challa and his villainous double Killmonger feels natural and earned, with terrific performances (especially from Jordan as Killmonger) keeping the film grounded in emotion and character.

“Black Panther” has one of the best supporting casts of any Marvel film and they all get their chance to shine.  Danai Gurira is terrifically intimidating as Okoye, the leader of the Dora Milaje, T’Challa’s group of all-female bodyguards, while Lupita Nyong’o is equally good as Nakia, spymaster and one-time love interest to T’Challa.  Also stealing every scene she’s in is Letitia Wright as T’Challas kid sister Shuri.  Not only is she sassy and full of fire but she’s probably the smartest person in the Marvel Cinematic Universe.  She’s basically Q to T’Challa’s Bond, designing and testing all the futuristic gadgets the Black Panther uses.   Rounding out the superb supporting cast are Winston Duke, Angela Basset, Daniel Kaluuya, Sterling K. Brown, Martin Freeman, and Forrest Whittaker.

The effects work, for the most part is outstanding with a few dodgy CGI pieces (fake looking battle rhinos, I’m looking at you.)  and the world-building, especially the combination of culture and technology in Wakanda is outstanding.  It may be a fictitious place, but it’s a fictitious place I’d love to visit.  The action is pretty well done save for the finale which seemed a little flat to me from an action standpoint.  Fortunately the emotional heft due to the great character development makes up for some of the minor mistakes in the film.

Make no mistake: “Black Panther” is one of the better Marvel films out there and if you want a fairly self-contained story with some serious substance, “Black Panther” is the movie for you.  As to whether or not it will change your life should be taken on a viewer-to-viewer basis.  It did not change mine, but I have a feeling I wasn’t the precise target for “Black Panther’s” transformative powers.  Loved the movie though!  4 1/2 Out Of 5 On Kendog’s Barkometer!  So Sayeth The Kendog!

Don’t forget to check out my latest reviews on the Dog’s Movie House Podcast, including “Annihilation” and “Game Night”  Check out the link here.